skip to main | skip to sidebar

Moriya Re! Bappa! Moriya Re! Ganpati Bappa Moriya! Purchya Varshi Laukar Yah!
Ganesha is the undoubtedly the darling of the masses. I have been collecting Ganesha by few of the known and unknown artists and each artist have depicted him in their career some time or the other. Though he is taken for granted by the artists and in turn they represent him in a variety of forms, there is some symbolism attached to the standard form of his:

M F Husain's series on Ganesha speaks volumes of his mastery over his line drawing, composition, color, humor, which can keep you spellbound, though a lot of people comment - 'what is there in his paintings? ... the best solution would be to not argue.

K M Adimoolam uses 2 ways of illustration; one is simplified single line illustration and more often the one he has created here is a little detailed rendering work to get tonal effects using a combination of black & white shading with his marker.

Kolkata's noted Shyamal Mukerjee uses his regular stylized version of decorativeness to glorify Ganesha with highlighting only the face form on the acrylic sheet.
One more artist, who frequently uses acrylic sheet to his advantage and experiments more and more with new pigments is our Bengaluru's much loved J M S Mani. He creates Ganesha every year only during the festival season by popular demand.

Subramanian G(popularly known as Subra) used to paint a lot some years back meditating on gods to invoke their blessings during the painting sessions. Those were pure line creations with wash method of painting. Now he has switched over to paper collages on canvas and has reached the zenith in a short span of time. Please do have a dekho at the panchamukha ganesha from my collection and enjoy the painting.

I have represented symbolically Ganesha with "OM" using pastels, I also use this as my official logo. 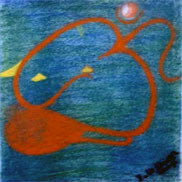 Ganesha has 2 wives, Sidhi(success) & Riddhi(prosperity) and those who pleases Ganesha will automatically profit from his 2 wives with success & prosperity, so on this occasion let me wish you all a very cheerful Ganesha Chaturthi festival ahead!
Posted by Art Enthusiast at 3:12 AM 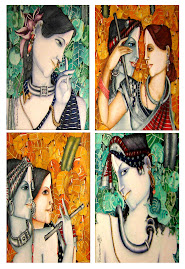